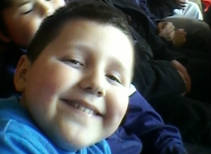 A TEN-year-old Bristol boy has been diagnosed with a rare genetic disease which is attacking his nervous system – and there is no known cure.

Like other boys his age, Liam Rice is a huge football fan. But tragically the youngster is fast losing the ability to kick a ball himself.

The St George youngster has Friedreich's ataxia – a disorder that is likely to eventually leave him reliant on a wheelchair.

There is currently no cure for the progressive condition, which causes damage and the eventual death of certain nerve cells within the body.

The diagnosis of the disorder caused his parents to break down in despair about their son's future and now Liam's friends and family are focusing on raising money so that the youngster has the best chance of trying any new treatments that come along.

The Bristol City fan had always been heavy-footed and rather clumsy. At the age of six he was diagnosed with Asperger's.

Despite his difficulties the youngster had managed to teach himself to ride a bike, play football and swim but the Friedreich's ataxia that was diagnosed on February 3 means that he now struggles doing the things he enjoyed.

His mother Laura, 32, said: "Liam always had low muscle tone and an extended gait where his feet point outwards and had been going to physiotherapy and occupational therapy about it."

Liam's father, Matthew, 37, said: "Liam is really determined. We couldn't teach him to ride a bike so he taught himself and was starting to show improvements. He loves football and supports Bristol City and one of the biggest things for him was to be in a football team. He would always be the last picked for a kick about in the playground but we were really impressed that he started making real progress and would compete at weekends. There was swimming club as well because it was really good for him."

Mrs Rice said: "It was watching Liam swimming that I noticed something was wrong. He was slower than everyone else and was just using his arms and his legs were dragging down. I thought that isn't right so we went to the doctors.

"The physio at the school also noticed that he had a tremor and was more unsteady on his feet."

The family was told that Liam probably had a form of ataxia – which refers to a collection of different conditions – but more tests were needed to confirm what form he had.

Mrs Rice added: "We were called to the children's hospital and because they didn't want us to come in immediately we thought it couldn't be too bad. When they told us Liam had Friedreich's ataxia I didn't have a clue what it was, then they went on to say that it was a genetic disorder, that it was slow progressive and that he will be in a wheelchair one day. It was at that point Matthew broke down.

"My sister was next door in the BRI with my mum and I knew I just had to get her to come over to be with us. She asked all the questions but I didn't really take anything in."

Friedreich's ataxia can also lead to diabetes, heart problems and issues with eyesight and hearing.

Mr Rice, a builder, said: "Our future is a very anxious one.

"We are getting involved in fundraising because with an uncertain future we want to be prepared for any treatments that come along.

"We are calling the fundraising Liam Loves Life, because that is one of his sayings. He's aware of pretty much all the facts and his reply was 'Bad things happen but good things come'."

There are people running for Liam, having their heads shaved and his six-year-old sister Elizabeth is holding a bake sale. A fun day has been organised at the Railway Tavern in Fishponds on June 4 from 1pm, and the family is hoping businesses might donate lots for the auction.